Below is everything you need to know about WYRA's competitive program, but if all you need to do is sign up for the upcoming season (this is for returning rowers, too), then please go to our sign up page. 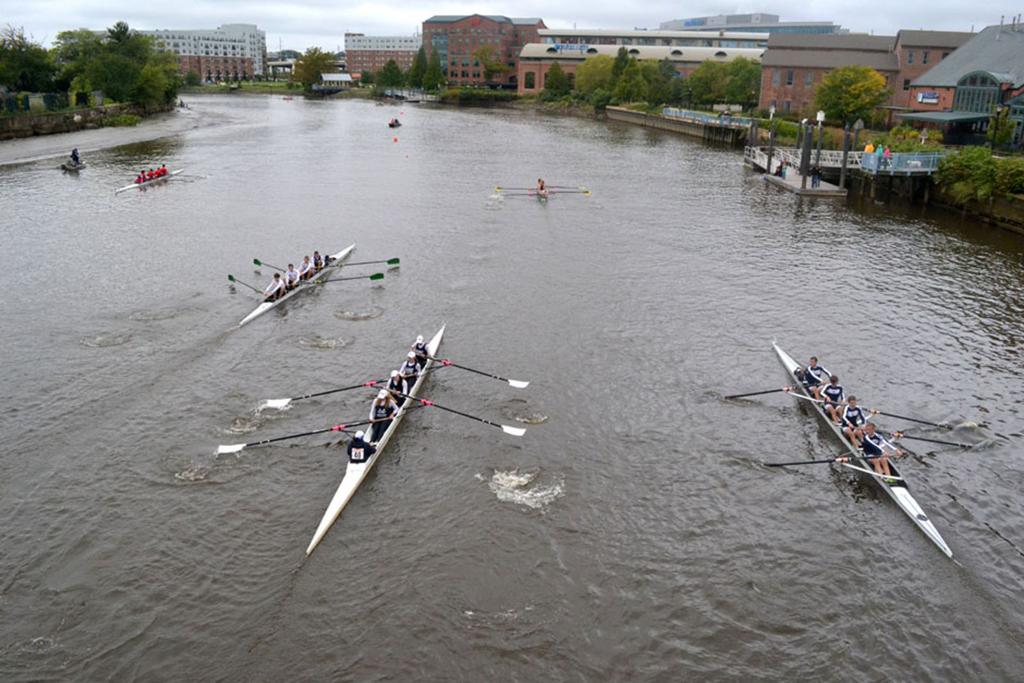 Fall racing is comprised of time-trial style races of distances ranging from 4000-5000 meters in length.  WYRA hosts the first race of the season, The Head of the Christina Regatta, right from our boathouse.  With races being longer in length, the team focuses not only on technique, but establishing a strong base level of fitness and creating a desire to compete against some of the nations top level rowing programs.

The winter rowing season consists of cardio and weight training at our boathouse.

WYRA is home to over 20 top of the line ergometers (rowing machines), a full weight room, and indoor rowing tanks.  Each day, the emphasis of every workout is to improve on your personal fitness level and racing mindset.  The primary goal of winter training is to enhance your level of endurance and power to a new standard, providing the best chance for success in the upcoming spring racing season.  Every winter, WYRA travels to various Indoor Rowing Races to put our athletes up against other teams in 2000 meter erg races.

March 1st - First week of June. This is dependant on USRowing Regional and the National Championships; Both the Men's and Women's teams practice Monday through Friday 3:30-6, and Saturday 8:30-11am.

The spring racing format differs from the fall.  In the spring, athletes will be racing not against the clock as with the fall, but rather lining up next to other crews in a 2000 meter sprint style race.  Once athletes hit the water, coaches will work on the fundamentals established the previous season to create boats in various categories which possess the best possible chance for success.

Be sure to check the calendar for the complete race schedule.

Where does WYRA race?
WYRA crews have competed up and down the East Coast and even Henley, England. Most of the racing, however, is in DE, PA and NJ though some championship or national regattas can be held as far away as California or Florida.

Do I have to join for the whole year or can I choose my seasons?
You can row in whichever season works for you. Though most kids row in both seasons, we have lots that have other sports they’ve already committed to and therefore only join WYRA for one season a year.

Who can race with WYRA?
Anyone between the ages of 12 and 18 can row for WYRA, but we do not take seniors as novice rowers. There are no “benchwarmers” in WYRA crew, everyone gets to row and compete. Though WYRA is a co-ed program, the boats are never mixed. Land training, however, can be co-ed.

Does everyone compete in every regatta?
The answer is mostly yes. Most regattas WYRA participates in are general regattas that accept novices through varsity, both boys and girls, though sometimes we’ll take crews to more specific regattas, such as the Junior Nationals, where crews have to qualify in order to compete. These types of races, however, are usually after the main season has ended. WYRA never ‘cuts’ kids. Anyone who joins will practice with the team and race with the team. We do organize boats so everyone in the boat will be at the same approximate skill level, making that boat as competitive as possible.

To learn even more about WYRA, take a look at our About Us page. We explain our mission statement as well as give a list of the schools and colleges our rowers have attended and how WYRA helps your child get into college.